IRISH trainer Adrian Keatley took the honours on the opening day of the 2016 flat season at Ayr Racecourse. saddling a treble with former six-time champion jockey Keiren Fallon riding two of the winners.

The Curragh-based handler sent out Mo Henry to win the Watch on The Racing UK App Handicap, and followed up half an hour later with Anonymous Lady in the Racing UK Handicap Stakes. Both were ridden by Fallon.

Robbie Dolan, a youngster who had never ridden a winner in Britain before, completed the treble for Keatley in the Spring Promotion At Western House Hotel Handicap on Nice Vintage.

The delighted trainer said: “I knew my horses were in good form, and I have a good record at Ayr. We fancied the one we ran in the first as well – Patience A Plenty – but he disappointed slightly. But to have three winners is great.”

Keiren Fallon added: “I love coming to Ayr, and have ridden a lot of winners here over the years. I'm based back in Ireland now, but will be coming over as often as possible. I ride out a lot for Adrian - he's a good trainer."

Another in-form trainer was Uplawmoor-based Jim Goldie who saddled a double. The top trainer at Ayr for many years, Goldie got off the mark for 2016 when Funding Deficit, ridden by Danny Tudhope, fought off the challenge of the Michael Dods-trained, Paul Mulrennan-ridden Sea Wolf to win the feature race, The Weddings At Western House Hotel Handicap over seven furlongs. 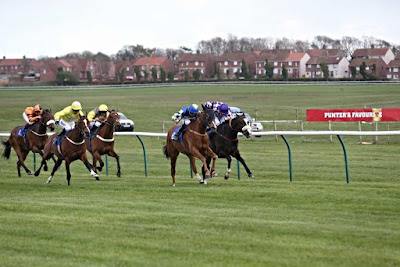 His second winner of the afternoon came courtesy of Haidee's Reflection in Division One of the Conference and Events at Ayr Racecourse Handicap run over a mile. Again ridden by Danny Tudhope, the six year-old broke into the lead about two furlongs out and kept on for pressure to beat Tellovoi who was finishing best of all after a tardy start.

A very promising horse Irish Optimism followed up his racecourse debut by winning the opening Racing UK 1 Price 3 Devices Maiden Stakes over six furlongs from Geno who ran a solid race in second.

Jockey Phillip Makin riding for John Quinn reported that the horse would probably benefit for running over an extra furlong and added: " He wouldn't want the ground any quicker than that." Jim Goldie's racecourse debutante Insurplus caught the eye running into third at 40-1.

Another Scottish trainer in form is Iain Jardine who saddled a big winner at Perth last week with Double Whammy and was on target yesterday with Pick Your Battle(5-2 favourite) ridden by Royston Ffrench in Division Two of the Conference And Events At Ayr Racecourse Handicap over a mile.

There was a fourth Scottish trained winner in the finale, the Racing UK’s Profits Returned To Racing Handicap over one mile two furlongs when Keith Dagleish’s Sattelac got up under a fine Phillip Makin ride to beat the favourite New Abbey Angel.