South Ayrshire Council is preparing to welcome The Royal Highland Fusiliers, 2nd Battalion, The Royal Regiment of Scotland back from their latest tour of duty overseas. On Wednesday 8 June a homecoming parade will take place in Ayr. 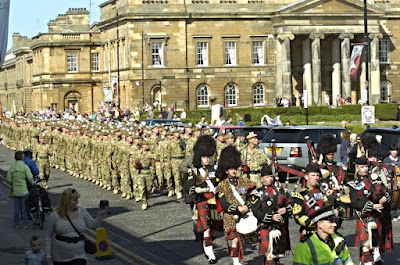 The 2nd Battalion are returning from Afghanistan with 400 troops expected to march through Ayr town centre, where large crowds will line the streets to show their support.

South Ayrshire Provost Helen Moonie said she was sure the soldiers would be warmly received. “We’re proud to welcome hundreds of soldiers to the streets of Ayr after a gruelling tour which saw them put their lives on the line in Afghanistan.

“We have a long tradition of supporting the armed forces, and I know the people of South Ayrshire will come out in numbers to show their support.

“After the parade we’ll be welcoming 2nd Battalion to the Town Hall, where a number of local soldiers will be awarded service medals following their action in Kabul, in what promises to be a memorable day for all those involved.”

The soldiers will march from Wellington Square at 11:30am, past the Wallace Tower and then on to a civic reception at the Town Hall where soldiers will be presented with operational service medals.”

This year marks 100 years since the battle of the Somme during the First World War, so it is particularly poignant that we celebrate with those that have returned and remember those that have made the ultimate sacrifice as well.

Lieutenant Colonel Graeme Wearmouth OBE, Commanding Officer 2 SCOTS, said: “It will be a tremendous honour for the Battalion to parade in Ayr and thank the local community for its ongoing support.

“As the Kabul Protection Unit, 2 SCOTS’ primary mission was to protect NATO advisers and other personnel striving to advise and mentor the various Afghan Security institutions which are so critical to Afghanistan’s future success.

“Following these parades, we’ll be preparing for the next challenge: being held at readiness as part of Scotland’s Fighting 51st Infantry Brigade.”