People buy and restore old buildings for many reasons, and with Conservation Area Regeneration (CARS) funding available through East Ayrshire Council and Historic Envirionment Scotland, more owners are now taking on ambitious renovation projects. But Stephen Scoular’s story is more unusual than most - a tale of detective work which led to him being party to an archeological dig and tracking down a German-based Russian opera singer, all because of his dislike of some peeling paint in Galston. 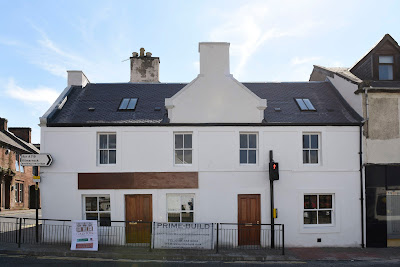 Driving to work from Galston to Glasgow every day, businessman Stephen Scoular became increasingly frustrated every time he stopped at the traffic lights at the Cross. Not because he’s an impatient driver, but just because of the sad state of repair of the building on the corner, one of the oldest in town.

Eventually he heard that the top flat in the building at 33-35 Bridge Street was up for sale at a very reasonable price (partly due to its poor state of repair) and, bursting to give it “a good coat of paint and a tidy up”, he put in a successful offer.

Of course, true to the nature of old buildings, he soon discovered that it needed more than just a coat of paint, but was unable to make much progress with improving it while others also shared the building. He explains: “I really thought if I just bought the flat and tidied it up a bit that would do, but there were issues with the roof and the general fabric of the building which I couldn’t fix without access to the whole building, so the simplest solution seemed to be to buy the other owners out.”

“And that’s where it got a bit more complicated. It turned out that part of the rest of the building belonged to a Russian opera singer, now living in Bonn in Germany, who’d bought it a number of years before, intending to use it as a music school because of its proximity to Moscow – the one up the road, not the one in her homeland! She’d never visited it and the property was lying empty and deteriorating.

“It took some detective work to track her down, but fortunately eventually we were able to acquire the remainder of the building. Then, with the help of East Ayrshire Council’s CARS team, we were able to set about planning an extensive programme of renovation and repair.”

Working in conjunction with the CARS team, Rebecca Cadie and Oliver Elliott of ARPL Architects and Ewan Mackie of Prime Build who oversaw the construction, Stephen has set about a comprehensive programme of renovation using strictly prescribed traditional methods and materials, in keeping with the rules of the CARS ethos. Funded jointly by East Ayrshire Council and Historic Environment Scotland, the scheme gives owners of conservation area buildings up to 90% of the cost of renovating architecturally important properties which would otherwise be uneconomic to repair.

In this case, the age of the building which is thought to date to the 1830s, and the suspicion that it might have been built on the site of an earlier settlement, meant that the floor had to be lifted and an archeological dig carried out. While it found no trace of the earlier habitation, it did reveal traces of the building’s former use as a pub, with the discovery of some old coins and clay pipes – once widely given out as a sales promotion to beer drinkers in the days before cigarettes.

Stephen is planning to feature the items in a specially built display case once all the work is complete. He says: “What started as a plan to tidy up an eyesore has become a bit of a passion, and now it’s about to become my new place of work! I’m relocating my office here and I’ve got a tenant who will be taking over the ground floor and setting up a new business. It will be good to see it coming back into use, and we’re getting a special display case made to show off the artefacts discovered during the dig. I’m delighted that we’ve managed to save this building and bring some new life to Galston Cross. None of it would have been possible without the help and support I’ve had through the CARS project.”

As a builder, Ewan has been involved in many such projects in and around Ayrshire in recent years. Projects like this have helped keep skilled tradesmen in employment through the worst of the recession, and a skills shortage has meant that we’re having to train more young people so we can meet the specialist requirements of the contracts. Wherever possible we employ local craftsmen for these heritage jobs and it’s great to see their skills being kept alive. With so many old buildings in the area, there’s plenty of restoration work to keep us busy for years to come as long as there’s funding like this.”

Councillor Jim Buchanan, Cabinet Member for Economy, East Ayrshire Council said: “This project exemplifies all that’s so exciting about regeneration. Helping preserve our architectural heritage, bringing companies together to co-operate, employing local skilled people, providing training opportunities and creating wind and watertight, fit for purpose buildings and business premises in the heart of our towns. The people of Galston have waited patiently to see these first CARS projects near completion, and this is just the first of many positive changes to the townscape which we’ll be seeing in the months and years to come.”

ARPL Architects Ltd is a Founder Member of the Elite Ayrshire Business Circle.