The winning name of the new community leisure centre at Girvan Harbour has been unveiled this week as construction work got underway on the new £6 million facility, which will be called The Quay Zone. 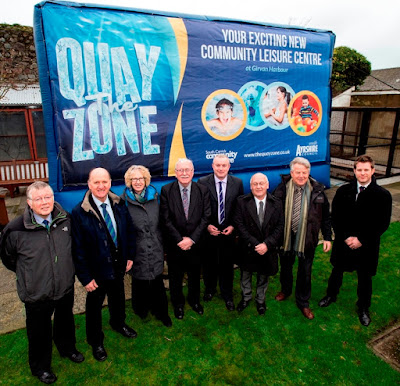 The Quay Zone name and logo – unveiled today on an eye-catching billboard – were suggested by Ballantrae resident, Robert Whittington, who entered the public competition to name the new centre and now becomes the Quay Zone’s very first member by winning a year’s free membership.

Robert (35), a gardener at Glenapp Castle, said: “I’m chuffed to win the competition, which I only entered as a bit of fun, and am really honoured and excited to be the first member of the Quay Zone. I picked up the competition leaflet from my boys’ school bags and, as we’ve been following developments for the new leisure centre closely, thought I might as well give it a go.

“I came up with the name based on the waterside location for the new centre and to reflect the fact – as we kept hearing – that the centre was going to be much more than just a swimming pool. So, Quay for the water, and Zone because there’s lots of different things you can do. I even thought younger people might even want to shorten it to the QZ!

“Our whole family will definitely be making use of the Quay Zone when it opens – it will make a massive difference to us and I can’t wait to be first through the door.”

Councillor Bill McIntosh, Leader of South Ayrshire Council, said: "Today is a truly historic occasion as we embark on a journey that will not only help regenerate the Girvan and South Carrick area and economy, but will have a very real and positive impact on people’s health and wellbeing and quality of life.

“The Council has worked closely with South Carrick Community Leisure to ensure that our people and communities have had their say every step of the way, and there’s no doubt they have been a real driving force in getting us to where we are today.

“I know that passion and commitment will continue as SCCL take up the operational reins and I hope they get the buy-in and support they need from the local community to make sure the Quay Zone is a great success.

“I’m very proud of what the Council and community have achieved, working in partnership. There’s no doubt we are making a difference and making lives better and I’m very much looking forward to seeing the Quay Zone take shape at Girvan Harbour.”

Andrew Sinclair, Chair of SCCL, added: "This is, without a doubt, one of the most exciting days Girvan and South Carrick has seen in a very long time and I want to thank everyone who has supported us as we worked with the Council to bring our vision for quality leisure facilities to life.

“I also want to thank everyone who took the time to enter our naming competition and let us know just how much interest there was in local communities about what we were doing. We were overwhelmed by the response and it was very difficult to choose between the suggestions; however, Robert’s idea really stood out and picked up on all the key elements we wanted it to.

“It’s almost impossible to imagine just how much The Quay Zone will transform lives right across Girvan and South Carrick and whether you’re an intense athlete, keep fit regularly, or just want to have fun or somewhere to get together, we’ll have something to offer everyone when we open our doors in 14 months’ time.

“It’s been a long, hard slog and we know there’s more hard work to come as we do everything we can to make sure the Quay Zone is a success. For today, however, we can all be very proud and we can say – we did it!”

Minister for Housing and Welfare, Margaret Burgess MSP said: “I’m delighted to mark the start of construction of the new Girvan and South Carrick Community Leisure Centre which will transform this vacant site into a fantastic community hub and help improve people’s health and wellbeing.

“This £250,000 investment through the Regeneration Capital Grant Fund will also support the creation of new jobs and open up training opportunities for young people.

“By working in partnership with local government, this fund is providing a catalyst to the successful delivery of regeneration projects across Scotland.

“Investment in local projects like this, which place communities at their heart, is absolutely key to tackling inequalities in disadvantaged areas. It is this approach which is at the core of Scotland’s economic strategy to stimulate economic growth and create a fairer Scotland.”

“The Quay Zone will provide a fantastic, modern environment for the community to enjoy and will be visited by many generations to come.

“We are proud that local people benefit from the projects we are involved in, and we look forward to working with South Ayrshire Council, Morrison Construction and contractors from the surrounding area to deliver this excellent community facility.”

Morrison Construction Ltd has been appointed as the design and build contractor for the project through hub South West, which was set up by the Scottish Futures Trust to deliver major public sector building projects.

South Ayrshire Council has committed a total capital contribution of £4.35 million for the Quay Zone – more than 72% of the overall costs.

In addition, the Council is investing £200,000 revenue funding every year to support the running of the facility – this will total £8 million over the duration of the 40-year lease which is proposed with SCCL.

Posted by Ayrshire Scotland Business News at 7:38 pm No comments:

Pupils at Queen Margaret Academy in Ayr will be among more than 6,500 pupils set to benefit from the construction of 19 new schools across Scotland, First Minister Nicola Sturgeon confirmed this week. 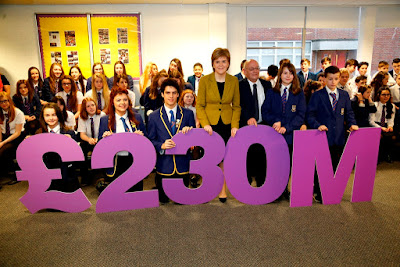 A £230 million investment, part of the final phase of the £1.8 billion 'Schools for the Future' programme, will take the overall number of schools being delivered to 112. All 19 schools will be completed by 2020.

Since the Schools for the Future programme began it has created an estimated 11,000 construction jobs and 230 apprenticeships.

First Minister Nicola Sturgeon this week met pupils and teachers at Queen Margaret Academy in South Ayrshire which is set to be replaced. The new building will receive a share of the funding and will include a supported learning centre for up to 50 young people with complex learning needs.

The First Minister said: "We are working hard to improve educational standards across the country to make sure that every child in Scotland has the ability to achieve their potential.

"Part of that is making sure that children have the right physical environment to learn in. This ambitious plan will replace older schools across the country with new, modern buildings that will bring benefits to the whole community.

"We had planned to build or refurbish 55 schools across Scotland, these new schools now take the total to 112 – more than double our original target. Since 2007, we have worked with local authorities to rebuild or refurbish 607 schools, resulting in the number of children educated in 'poor' or 'bad' condition schools falling by 60 per cent.

"This infrastructure investment programme has already generated an estimated 11,000 construction jobs and 230 apprenticeship placements. Now as these further developments begin construction we will see a further boost to the economy right across the country."

"The new purpose-built school will transform the learning and teaching environment for hundreds of young people, our teachers and school staff, with state-of-the-art facilities – some of which will also be available to the wider local community, including sports facilities and a lifelong learning facility.

"This will help ensure that the excellent education our young people enjoy will be matched by access to the first-class facilities they deserve, and we'll now get to work in putting the plans for the new school in motion."

"We are working with all local authorities to achieve the very best value for the investment in their new schools which will be of benefit to thousands of pupils across Scotland, whilst also supporting many local SMEs when construction starts."

Posted by Ayrshire Scotland Business News at 7:23 pm No comments: