Scotland’s leading independent property consultancy CKD Galbrait, has revealed that a steady final quarter of 2016 in Ayrshire has been followed by a burst of activity during the first month of 2017.

Buyers from across the country are continuing to prove key to successful sales in the Ayrshire property market, with an increasing number of prospective national buyers recognising the value for money offered across the region.

The firm’s Ayrshire office also reported a notable change in selling season habits, with a significant rise in buyer activity during the first month of 2017. January is traditionally a quieter time of the year in the property sector, however the Ayr office handled 167 viewing enquiries and 198 new applicant registrations during the first five weeks of 2017 alone. 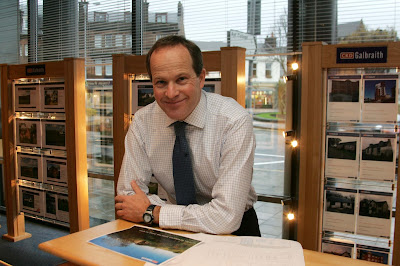 Bob Cherry (pictured above), head of residential sales at CKD Galbraith’s Ayr office, said: “Property supply and demand across the region remained steady throughout the final three months of last year, but January’s surge in buyer activity should act as a catalyst for those who are still delaying until the spring months to sell.

“We now operate in a twelve-month market, and our viewing figures demonstrate a healthy buyer appetite which should be seized upon now by sellers.

“Ayrshire is becoming an increasingly popular option for those priced out of a progressively more expensive Glasgow market. Buyers are beginning to recognise the value for money and lifestyle options on offer here, with many sought after rural family homes available under the £350,000 mark.”

CKD Galbraith operates a network of regional offices across Scotland and figures for the firm as a whole during the last quarter of 2016 show a rise in sales of 17% compared to the same period in 2015.

The firm also reported a 12% rise in the number of properties available for sale during quarter four, demonstrating the increased confidence of sellers to make a move. Scotland is continuing to experience strong levels of demand across all aspects of the residential market despite confidence and sales volumes dipping in other regions of the UK over the same period. CKD Galbraith believe this due to the competitive pricing and value for money that remains available in Scotland.

The firm is Scotland’s largest and leading rural consultancy managing and providing advice on farm, forestry, land and estate interests on over three million acres. CKD Galbraith provides the full range of property consulting services across the residential, commercial, rural and renewable energy sectors throughout Scotland and northern England.