Trainer Mike Smith gets back to winning ways at Ayr Racecourse

TRAINER Mike Smith, who trains just 10 miles from the track at Galston, trained his first jumps winners for eight months at Ayr Racecourse last Monday when landing an 84-1 double in the first two races. 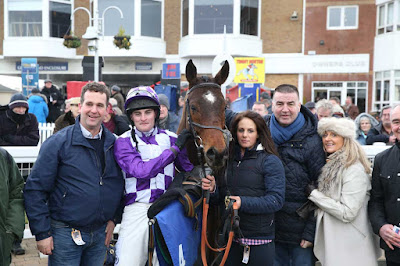 Strong Economy, ridden by Stephen Mulqueen, won the opening two mile five furlong maiden hurdle at odds of 4-1 by a comfortable six lengths after going clear two out. Half an hour later Glingerside (pictured above) defied odds of 16-1 to win the two mile novices’ hurdle under jockey Henry Brooke.

A delighted Mike said: “My horses have been running well enough without winning, and I was confident we would do well today.

“Hopefully we can kick on from here and land a few more wins in the coming weeks. Glingerside didn’t hurdle well last time out, but we schooled him at home and he was slick today.”

The stable was denied a treble in two mile four furlong handicap chase when Nakadam, 4-1, was beaten a length and a quarter by the Nick Alexander trained, Lucy Alexander ridden The Orange Rogue, an 11-1 chance.

The fourth Scottish trained winner of the afternoon was Newtown Lad, 5-2 favourite, trained by Lucinda Russell and ridden by Tom Scudamore, who was very impressive in winning the three mile limited handicap chase by 19 lengths from Sevenballs Of Fire.

Other winners on the card were Simply Sam, 3-1 favourite, in the two mile three furlong handicap hurdle and Sam’s Adventure, 8-11 favourite in the final race of the day, the two mile national hunt flat race.

Ayr’s next meeting is on Tuesday 14 February.