BORDERS trainer Sandy Thomson saw his luck turn at Ayr Racecourse’s first meeting of 2017 on Monday when he saddled a double.

His successes came with Rowdy Rocher (5/1) in the three mile handicap hurdle with Rachel McDonald riding, and Donna’s Delight, the mount of Brian Hughes, in the bumper sent off at 6/5 favourite. 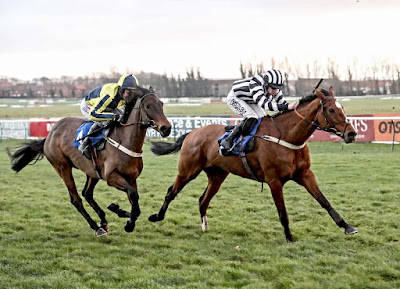 And afterwards Sandy said: “That’s a relief, as I’ve had five seconds from my last ten runners, so to have two winners is great.”

Ian Duncan, who trains a few miles from Ayr in the village of Coylton, has a decent sort in King Of Fashion who won the two mile four and a half furlong maiden hurdle after being sent off the 11-8 favourite.

Jockey Brian Harding oozed confidence and won by six lengths from Strong Economy. His trainer said afterwards: “He’s getting stronger all the time and there’s no doubt he’s improving. The ground was ideal and he stays well.”

Sunderland football boss Davie Moyes has a share in Desert Cry who won the feature race of the afternoon, the Racing UK Winter Season Ticket Handicap Hurdle comfortably after being sent clear three out by jockey Will Kennedy.

It was a day when five of the seven favourites won, with the easiest success of the day belonging to the George Bewley trained, Brian Hughes ridden Casual Cavalier who won by 14 lengths and was returned at evens.

Despite overnight temperatures of -3C, the meeting went ahead owing to frost covers being laid on Friday and Saturday to protect the track.

It was a move appreciated by all, including senior jockey Brian Harding, who commented: “All credit to the team here. This wouldn’t have gone ahead without these covers being down.”

Posted by Ayrshire Scotland Business News at 2:45 pm No comments: