AYR Racecourse, Scotland’s premier racecourse and only Grade One track, has once again been awarded the highest accolade in Scottish tourism - VisitScotland’s 5-Star Visitor Attraction status. 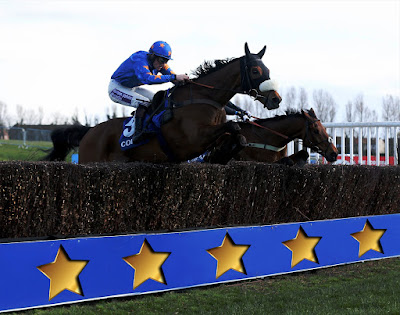 The Racecourse retained the coveted top grading following an incognito visit by one of VisitScotland’s Quality and Tourism Advisors to experience and assess aspects ranging from the standards of its visitor information, signage and car parking, exterior and interior presentation and cleanliness, to the hospitality and friendliness of staff, and quality of the catering.

The scores each area achieved combined to ensure we once again were awarded 5 Star Visitor Attraction Status which was first bestowed on Ayr Racecourse in 2015 and has been retained each year since.

Ayr Racecourse managing director David Brown said: “I am delighted on behalf of all of the team at Ayr that we have once again been awarded 5-Star Visitor Attraction status.

“The standards set to achieve this award are incredibly high and we have set a high bar for customer service not just to originally be originally awarded 5 stars but to maintain these standards since 2015 and to keep this status.”

Posted by Ayrshire Scotland Business News at 3:32 pm No comments:

Ambitious plans to transform the education of children and young people with additional support needs in Girvan and South Carrick are now well advanced. The South Ayrshire Council project to build a new Invergarven School has reached a major milestone, with the timber frame exterior now complete. 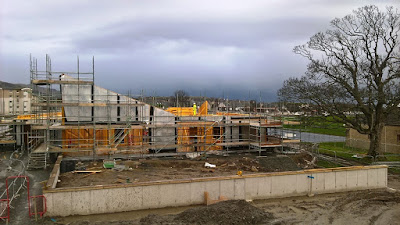 [Pictured: With the timber frame in place, work
continues on the new Invergarven School.]

Built in 1870, Invergarven is a special school for primary and secondary children and young people with complex additional support needs. The new £3.7m facility, which will replace the current building on Henrietta Street, is being built by CBC in the grounds of Girvan Academy, delivering spaces for learning and teaching including a sensory room, life skills kitchen, multi-use hall, hydrotherapy pool and external areas that support outdoor learning.

The new school will increase capacity by around a third with 20 children and young people able to be taught at any one time (up from 15 at the old school). 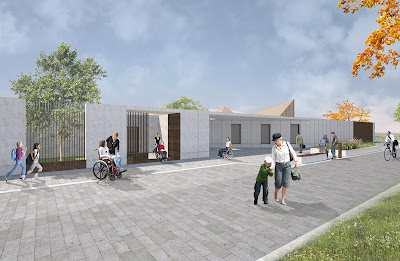 [Artist’s impression of how the new Invergarven School will look.]

Councillor Peter Henderson, Portfolio Holder for Resources and Performance said the project had now reached an important stage, “With the timber frame shell now in place, the new school’s reached its first major milestone, with the contractor now concentrating on making the building wind and watertight.

“There’s still a lot of work to do before the school opens later this year but children, young people and families are already looking forward to using a modern building that will enjoy close ties with neighbouring Girvan Academy.

“We’re committed to making life better for people in South Ayrshire and delivering the best possible education to children and young people. This project is a great example of investing in a rural community and allowing Invergarven to build on its enviable reputation for excellence.”

The new Invergarven School is expected to open in August 2018.

Posted by Ayrshire Scotland Business News at 8:56 pm No comments: