THE 2017 Grand National winner One For Arthur delighted trainer Lucinda Russell last week when he schooled after racing at Ayr.

Ridden by his regular jockey Derek Fox, One For Arthur jumped nine fences and will now head to Haydock Racecourse on Saturday to run in the Peter Marsh Chase, before another tilt at the Grand National in April. 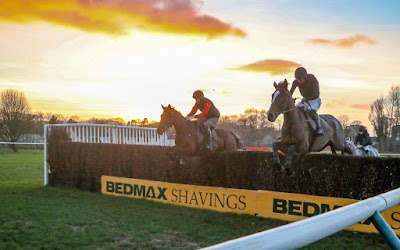 [Pictured: One for Arthur (right) schools at Ayr Racecourse.]

Lucinda said afterwards: “That was great. As always, Derek gave him a good ride, and that will have done him good. I can’t thank Ayr Racecourse enough for letting us gallop and school him after racing.”

One For Arthur was off the course for 20 months after his National win, and retuned at Aintree in December only to unseat his rider at the third, and yesterday’s gallop at Ayr was considered crucial by Lucinda.

The star of racing itself at Ayr was Las Tunas, who made amends for his fall two out at the track on 2 January when winning the Watch Racing TV Now Handicap Chase for trainer Mike Smith and jockey Stephen Mulqueen.

Travelling easily throughout the seven year-old went clear in the home straight and ran out a 10 length winner from The Orange Rogue.

Mike Smith said afterwards: “That was impressive. I was gutted last week when he fell,, but he is an improving horse and can go on from here.”

The feature race of the afternoon the racingtv.com Handicap Hurdle was won by Apache Jack who made all for trainer Stuart Crawford and jockey JJ Slevin to win by three quarters of a length from Bold Emperor.

The last race, a national hunt flat race, was won decisively by Ribble Valley, trained by Nicky Richards and ridden by Brian Hughes, who justified odds of 5-6 favourite to win by five lengths from Milvale.

The biggest priced winner of the day was the Tim Reed trained Leverock Lass, who won the 2m 4f novices’ hurdle at odds of 25-1 under a positive ride from Harrison Beswick. The big disappointment here was the 1-14 favourite Queens Cave, who was never travelling and pulled up after two out.