Ayrshire is set for a major jobs boost after it was confirmed that more than £240million is set to be ploughed into the local economy. The long-anticipated Ayrshire Growth Deal will now become a reality after the UK and Scottish Governments confirmed they would each invest £100m into a package of projects. 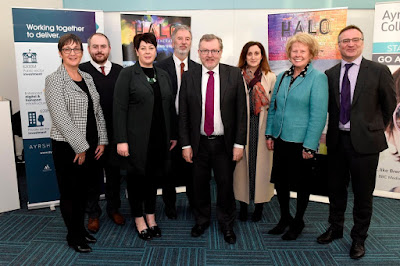 The Deal is likely to create thousands of jobs, bring £2billion of investment into the area, improve local infrastructure and breathe new life into the Ayrshire economy. It will also help support the wider Scottish and UK economies.

At a visit to the Halo site in Kilmarnock last week, Secretary of State for Scotland David Mundell MP confirmed the financial package agreed by the UK Government.

And in parallel the Scottish Government, who had already made clear their commitment to the Growth Deal, announced that they too would match the funding confirming they would also invest £100m.

Mr Mundell MP was joined on his visit by the three Ayrshire Council Leaders, chief executives and representatives of the Ayrshire Growth Deal team from both the public and private sector.

Infrastructure Secretary Michael Mathieson MSP visited Ayrshire this week, when the Growth Deal projects were expected to be high on his agenda.

The three Ayrshire Councils will commit financially to the Deal, with their investment likely to be around 20% of the overall package.

South Ayrshire Council leader, Councillor Douglas Campbell said: "This announcement is fantastic news and delivers the input from the UK and Scottish Governments that we've been working towards for the past three years. This is a ringing endorsement of Ayrshire's potential, and the economic impact we will have by delivering investment, jobs and business growth that will create a legacy for generations to come and make a real difference not only for our own people and places, but for those right across the UK.

"This funding will kick-start a wider investment programme across both the public and private sectors that will give us the chance to innovate, prosper and succeed and ensure Ayrshire is recognised as a world-class business region for the aerospace and space, energy, marine, manufacturing and tourism industries. This really is a milestone day for Ayrshire and a foundation for a bright, prosperous and successful future for all."

Councillor Joe Cullinane, Leader of North Ayrshire, said: "This has been a real collective effort by the three Ayrshire Councils, cross-party politicians, the public and private sector and many other partners.

"We are thrilled to have now received this confirmation of funding from the UK and Scottish Governments and are excited to say that that work will start on these projects this year.

"We have all worked incredibly hard and can now look forward to some really exciting times for Ayrshire. It's up to us now to deliver these projects and create the jobs and investment this area so desperately needs."

Councillor Elena Whitham, Depute Leader of East Ayrshire Council said: "This is tremendous news and is a real testament to three years of hard work, commitment and determination as we sought to demonstrate the economic growth potential of the Ayrshire Growth Deal for the Scottish and UK economies.

"It's all paid off and as this is the first Scottish non-city deal to secure funding from the UK Government, it brings us ever closer to finalising the right deal for Ayrshire.

"The Ayrshire Growth Deal will transform our communities for generations to come."

The Ayrshire Growth Deal partners include the three Ayrshire Councils, UK and Scottish Governments and national agencies, with support from the private sector. Investment will be in key assets and sectors that will not only positively impact Ayrshire but the Scottish and UK economies too.

Some of the projects included in the Growth Deal's strategic plan:

• Spaceport Infrastructure & Visitor Centre in Prestwick
• Creating a major waterfront destination at Irvine's Harbourside and the Ardeer Peninsula to boost number of tourists
• Investing into the digital automation capability in i3, Irvine to attract new business growth focusing on pharmaceutical/life science industries
• National Energy Research & Demonstration Centre in Cumnock
• The HALO Kilmarnock Ltd (Phase 1 & 2)
• Investment in road and rail infrastructure and digital connectivity across the region.