The Scottish economy has grown for the eighth consecutive quarter according to official statistics.

The latest GDP figures show the Scottish economy grew by 0.3% in the fourth quarter of 2018, higher than the UK rate of 0.2%. Compared to the same period last year, it has grown by 1.3%. 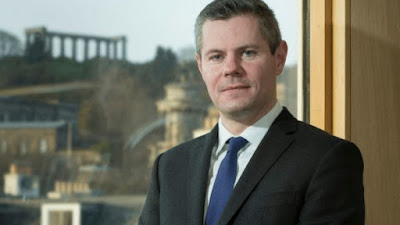 Scotland’s Economy Secretary Derek Mackay MSP (pctured above) said: “With eight consecutive quarters of growth and record low unemployment - down to 3.4%, the lowest in the UK - Scotland’s economy continues to go from strength to strength.

“Growing our economy and supporting businesses and jobs is a top priority for the Scottish Government. We have provided more than £5 billion of capital investment to grow and modernise Scotland’s infrastructure, and a wider package of support to businesses including maintaining a competitive business rates package and providing the most generous package of non-domestic rates reliefs anywhere in the UK.

“However, the UK’s EU exit remains the biggest threat to our economic stability. All forms of exit will cost jobs, make people poorer, damage our society and undermine the democratic decision of the people of Scotland to remain in the EU.

“The Scottish Government is firmly opposed to the UK’s EU exit and we continue to hope that it can be avoided, but with every passing day, the UK Government is getting closer to taking our economy off the cliff.

“Our first priority is staying in the EU, in line with the overwhelming vote in Scotland to remain, and we support another referendum on EU membership. Short of that, the least damaging option is to remain in the Customs Union and European Single Market of 500 million people - eight times larger than the UK market alone.”
Change in gross domestic product (GDP) is the main indicator of economic growth in Scotland. Two estimates of Scotland’s GDP growth are now published each quarter on a faster timetable than previously available.

Last year the Scottish Government launched Prepare for Brexit, a multi-agency campaign aimed at informing companies on a wide range of potential Brexit impacts and encouraging them to proactively prepare.

www.prepareforbrexit.scot is a dedicated website which hosts a Brexit self-assessment tool to help businesses identify how Brexit might affect them, providing recommendations for action to help their planning activities. It is also home to a 12-point checklist, expert advice, events, workshops and access to financial support.

The campaign is being delivered in partnership with Scottish Enterprise, Scottish Development International, Skills Development Scotland, Highlands and Islands Enterprise and Business Gateway.