Shenanigans was the star performer at Tennent’s Raceday, Ayr’s first Flat meeting of 2019, when she won the Listed Race on the card – the £50,000 Tennent’s Lager British Stallion Studs EBF Rothesay Stakes. 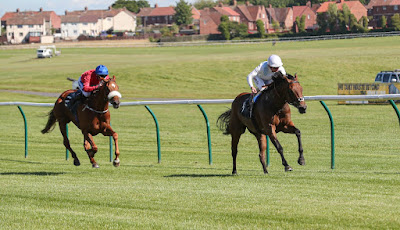 The Roger Varian trained five year-old mare (pictured above) travelled well throughout and hit the front two out and won readily by a length and a quarter from Exhort.

Andrea Atzeni rode Shenanigans and kept his 100 per cent record at the track, having won this race on his only other visit two years ago with Nezwaah, who went on to win a Group 1 at the Curragh.

The Keith Dalgleish yard continued an amazing run of form with a double on the card courtesy of Universal Gleam in the Orchard Pig Handicap over a mile with Danny Tudhope riding and with Maulesden May, the mount of Graham Lee,  in the 1m 2f Tennent’s Story Handicap.

The 6f maiden was a hot contest with the winner Lord Of The Lodge looking useful on his first outing for trainer Karl Burke and jockey Ben Curtis.

Posted by Ayrshire Scotland Business News at 4:39 pm No comments: